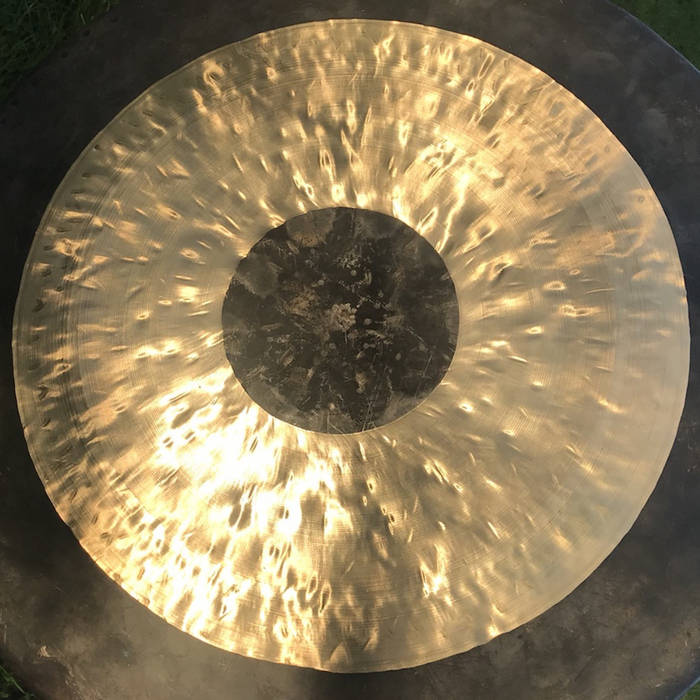 108
Our beautiful gong was found by Laura and was a mistreated instrument that had lived in a restaurant...battered and unloved. She rescued the gong, spending much time clearing her and releasing the energies that had bound her up for so long.
The result is our truely Brilliant gong that whispers, sings, growls and thunders with all the intensity of a living sun.

We’re delighted to share this with you and would like to thank Camilo Tirado for taking the time to record it for us.

HOW TO USE.
A word of caution, please don’t drive or operate any machinery while listening to this, it’s not intended for passive consumption. Consider it a medicine and make time to listen.
EG. At home, before bed, upon waking, while commuting on the bus/train/boat.
Definitely use headphones or plug into a stereo/hifi/TV or some kind of good speaker. Your device (phone/ipad/computer will not cope with the frequencies and will hinder the potency of the recording to the point of redundancy.)

We suggest you use it like mala beads (you repeat your prayer with each gong strike).

You might use it to replace redundant core-beliefs that you’ve discovered are holding you back, eg, a past belief such as ‘I do not deserve...’ and change it to ‘I deserve...’ or something like.
And this is why you might like it...
These sounds will change your brainwave state from Beta (the thinking mind) to Alpha (meditation, day dreaming and REM) and possibly Theta (deep meditation and deep sleep). If you want to reprogram Core Beliefs, you need to change your brain wave state for the practice to be effective...the gongs are a shortcut, helping you change your brainwaves very quickly.

108: Yoga’s Sacred Number
The number 108 is considered sacred, and continues to pop up in yoga, nature, and astrology. What’s the big deal? The namesake of our signature one-day event, explained here.

It was astronomer, mathematician, and physicist Galileo Galilei who said the universe is written “in mathematical language”—that the mysteries of creation itself could be unraveled through numbers and equations. For the mystics, such numbers offered more than a scientific explanation—they offered a code for awakening, a code to our own nature. And for the yogis, that code is 108.

In yoga, the number 108 refers to spiritual completion. It is why japa malas are composed of 108 beads, why pranayama is often completed in cycles of 108, and why sun salutations are often performed in nine rounds of the 12 postures (totaling 108). By practicing chanting, breath work, or asana in rounds of this sacred number, the ancient yogis believed we could align ourselves with the rhythm of the creation, and ultimately bring an end to our cycle of reincarnation.

When we start to drill down into our human form we continue to find the number 108 over and over again.
Exactly how the yogis arrived at 108 we don’t quite know, but it seems to be a number that connects us to our place in the cosmic order. The distance between the Earth and sun is 108 times the diameter of the sun. Is it possible that our ancient ancestors knew this? Around the time the ancient Vedic texts were being collected, far away Stonehenge was built—the Sarsen Circle is 108 feet in diameter. In Belize, during the era of the Mayans, the High Temple of Lamanai was erected at 108 feet tall—the same height as the funerary Tikal temple in Guatemala. And within the temple of Kukulkan at Chichen Itza in Mexico archeologists believe there to be a second pyramid inside measuring 108 feet wide. These temples, built to worship and to house the souls of great leaders upon their death, perhaps used this number to connect humans not just to our sun as a giver of life, but to the Creator.

In yoga we are often reminded that “as above, so below,” and when we start to drill down into our human form we continue to find the number 108 over and over again. Were we to draw a five-pointed star (representing a human being) inside a circle (a planet) and we would find 108 degrees staring back at us from every angle. Deeper into the microcosm of the human being, it is said there are 108 energy lines, or nadis, converging to form the heart chakra, and 108 marmas (pressure points) or sacred parts of the body. And 108 degrees Fahrenheit is the internal temperature at which the human body’s vital organs begin to fail from overheating.

Like the mantra Aum, 108 seems to have an essence that connects us to the whole.
In astrology—our connection with destiny—108 also appears frequently. The Earth, for example, is said to have an astrological cycle of 2160 years (20 x 108). While there are also 27 lunar mansions in Vedic astrology spread over the four elements, or the four directions (27 x 4 = 108).

Throughout spiritual teachings beyond the traditional yogic texts, we are reminded of this number in our search for liberation. Hindu deities have 108 names, and India is said to have 108 sacred sites. In Jainism there are believed to be 108 virtues. In China, some forms of Tai Chi have 108 moves. While in Tibetan Buddhism there are 108 delusions. Many Buddhist temples have 108 steps representing the 108 steps to enlightenment, and in Japan, at Zen Buddhist temples, a bell is chimed 108 times at the end of the year closing a cycle to serve as a reminder of the 108 earthly temptations a person must overcome to achieve nirvana.

Like the mantra Aum, 108 seems to have an essence that connects us to the whole. Be it used to guide sun salutations, to tally up the number of chants to the Divine, to count the steps leading up to a temple, or to measure the structures built for the heavens, it serves as a reminder of the wonder and interconnectedness of the universe.

Will we ever understand the deeper meaning of 108? The Greek mathematician Archimedes offers us a clue when he said: “Mathematics will reveal its secrets… only to those who approach it with pure love.”

released July 29, 2019
“Our deepest wish is for each and every person to realise their own brilliance”

Laura is an award winning Soprano and as such enjoyed an 18 year international career as an opera, concert and recital singer. She trained at the Royal College of Music, The Benjamin Britten International Opera School and The National Opera Studio. Alongside this she trained as a level 1 Clear Mind Institute mindfulness teacher, British Wheel of Yoga Hatha yoga teacher, an Integrated Yoga Therapist, and Esalen Practitioner. She is a member of the Sound Healers Association and a sound healing practitioner from The Colour of Sound Institute.
Laura is very experienced in using Sound and Meditation for deep healing, transformation and transcendence. She is dedicated to the transformation, health and wellbeing of humanity and the universe through the use of mantra and sound.

Gareth is a Harper, Jazz Pianist, Bowen and Flower Essence therapist. He has trained at Leeds College of Music and studied Orff-Schulwerk (specialist music teacher training) at the Royal Conservatoire of Scotland & San Fransisco School, setting up his own music tuition agency and music school. He is an Ultra Distance Runner and Swimmer and has an established clinic and field clinic for ultra distance sporting events.
Gareth started off his musical training as a Classical & Jazz Pianist and in his mid 30’s discovered the Harp. His interest with the Harp spans two worlds, the folk tradition and spiritual practice. He has dedicated years to travelling across Britain, learning from the masters of the tradition, enjoying playing in the darkest corners of the most isolated public houses and under the Sun & Moon for meditation, Spiritual and Shamanic practice.

The most brilliant sound medicine in the world.

Bandcamp Daily  your guide to the world of Bandcamp